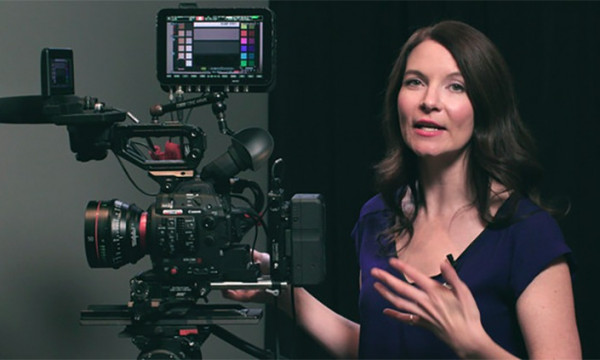 https://www.abelcine.com/
One of the world’s leading providers to the cinema and filmmaking industry, AbelCine offers a wide range of services including sales, rental, service and education. For thirty years the company has been providing the highest quality customer service and support, continually adapting to meet the evolving needs of the modern filmmaker.

Education and the sharing of knowledge is at the core of everything that AbelCine does, and its education team is comprised of experienced, knowledgeable camera specialists including Megan Donnelly, Ian McCausland, Nic Somera, Corey Christian and Geoff Smith.

5
Good one. Thank you AbelCine.
chandrashekar thooti
5
Very good.
Yiwen Wang
5
Straight-forward
Armen Sarkisov
5
Thank You for this solid piece of information.
Łukasz Kucharski
5
Awesome! Learned a lot.
Randy Tomlinson
5
Precise, easy to understand!
Raj Jadhav
4
Great information!
Bailey Quinn
4
I would love to know more about the complete assembly of the camera to the tripod - how can I mount wedge plate or base plate to the tripod, etc. How to connect monitor, focus system, etc. that would have been awesome.
venkata shiva Mutyala
3
I think that's like overview of all, and maybe you can go deeper in many mores aspect, like to take advantage from the technical characteristic and some built of it.
Alejandro Quiroga Duarte

In this comprehensive camera primer, join AbelCine Camera Technology Specialist Megan Donnelly to discover how to setup and operate the ARRI Amira digital camera system. This course teaches you exactly how to set up, configure and operate the camera, including the operation of the camera’s body controls, the menu system, working with audio, monitoring waveforms, working with LUTs and ARRI Looks and finally on to post production and how to understand and handle ARRIRaw files.

Join AbelCine Camera Technology Specialist Nic Somera as he breaks down the Panasonic AU-EVA1 digital cinema camera. After watching this course you will have a thorough understanding of the camera’s core features and how to operate it professionally on shoots ranging from one-man crews all the way through to large multi-camera productions.

Get to know the Canon Cinema EOS C300 MkII camera inside-out in this comprehensive camera primer, presented by AbelCine Camera Technology Specialist Megan Donnelly. After watching this course you will have a thorough understanding of the camera’s core features and how to operate it professionally on shoots ranging from one-man crews all the way through to large multi-camera productions.

5
Outstanding. Really enjoyed the class and advanced my learning.
Michael Fauser
5
Very nice and complete overview of the luts and its uses in differents stages of the production.
Pablo Franco
5
GABRIEL ARRUDA
5
This course is very informative. There are detailed explanations and examples of application. Short course, but I just learned so much! Thanks!
Branden Hart
5
Cool
Elio Sofia
4.5
Short but great! Thank You.
Łukasz Kucharski
4
Good and practical explanation through and through.
Cristal Ayala
4
Great understanding of LUTs, especially for an on-set use. Would have loved to go into more detail regarding the live-grading possibilities with regards to meta data for post-production use later on in our workflow.
Keith Tedesco
4
Basic introduction to the job of a DIT, from set concepts to how it can be used in post. Good value to someone starting out!
Timur Gavrilenko
4
Good course for them who needs to understand LUTs and how to use them correctly in camera or during topaz production workflow. But want to have in future more in depth study with more on set techniques how to work with LUTs, CDLs pithing live grading on set with Pomfort lets say or Baselight. Anyway many thanks for such course!
Iaroslav Kerget
4
Very useful, awesome hosts, but a little bit generic.
aniello ferrone
4
Very good course. It helped solidify a lot of terms and concepts. I agree with another reviewer that the first video was a little rushed, but otherwise it was presented well and very informative.
Cory Sheets
4
Pretty good content. Some of the initial "theory" stuff seemed to have been a bit rushed through. Loved the hands on stuff with the software though. Thanks!
Christian Pokrywka
3.5
There was useful information in this course, including the introduction portion and the brief bit about working with LUTs in post. I found the middle portions (which were dedicated almost entirely to very specific workflows using specific software) to be less useful. I also would have appreciated a little more detail in the final video regarding when/why you would use the various looks/LUTs/CDLs in a real world situation. The WHY is equally as important as the HOW.
Joe Henry
3
A little disappointed that only Davinci was used because it would be nice if Premiere was used to teach this as well.
Thomas Cooksey

The application of LUTs goes well beyond a “creative look” to plug in to your final project, and in this beginner’s course, AbelCine’s technology specialists Geoff Smith and Ian McCausland give you a thorough understanding of LUTs, their various applications, how to create your own and how to best utilitize them throughout production and post-production.

5
Excellent course! Nice & straight forward. Intense overview of the camera and its functions.
Pablo Franco
5
Straight forward. Great one.
Armen Sarkisov
5
Thank You for this course.
Łukasz Kucharski
5
Easy to follow, well thought out and makes something that looks overwhelming from afar simple.
Matthew Wyman
4.5
A good crash course on the ARRI Alexa Mini camera, dealing with various concepts about camera setup, operation, and post-production workflows, without getting too involved in the technical aspects of the camera itself. I appreciated the bite-sized modules, which can range anywhere from 4 to 17 minutes, as it makes each video module easier to watch, as opposed to having a module that is an hour or longer. The slides are informative and I like the short and concise definitions that described key concepts, such as exposure tools (False Colour, Waveforms, Zebras), Log C, ARRIRAW, LUTS, and many other technical definitions. A good course if you need to refresh your skills to prepare yourself to setup and operate the ARRI Alexa Mini camera, while learning basic cinematography and post-production skills.
Edmon Rotea
4
I thought the course was great, clear and concise.
Giles Mallard
3.5
Ok course with a basic knowledge of the camera and workflow. But a good point is how to work with LiveGrade software. And some LUTs and Look understating is explained quite good.
Iaroslav Kerget

In this comprehensive camera primer AbelCine Camera Technology Specialist Corey Christian takes you through the ARRI Alexa Mini, one of the world’s most popular digital cinema camera systems. Over 90 minutes this course teaches you exactly how to set up, configure and operate the camera, including the operation of the camera’s body controls, the menu system, working with audio, monitoring waveforms, working with LUTs and ARRI Looks and finally on to post production and how to understand and handle ARRIRaw files.