Should You Interview Before or After Shooting B-Roll?

In a documentary production, do you interview first, and then decide what B-roll to film? Or do you plan the visuals first and wrap with the interview?

Here’s a question that can divide a room of filmmakers quicker than cameras. When you’re shooting a factual video around a subject, do you interview them first before deciding what to shoot for B-roll? Or do you shoot first, and then base your interview around what you have in the can?

It’s a very important distinction that can steer your video story in completely different directions, even if the end goal is the same (which is to make a short video about a person). Choosing to interview first can help you produce a more rich and compelling story, but it could take more days to achieve, as you don’t really know what you’re shooting until after the interview is completed. 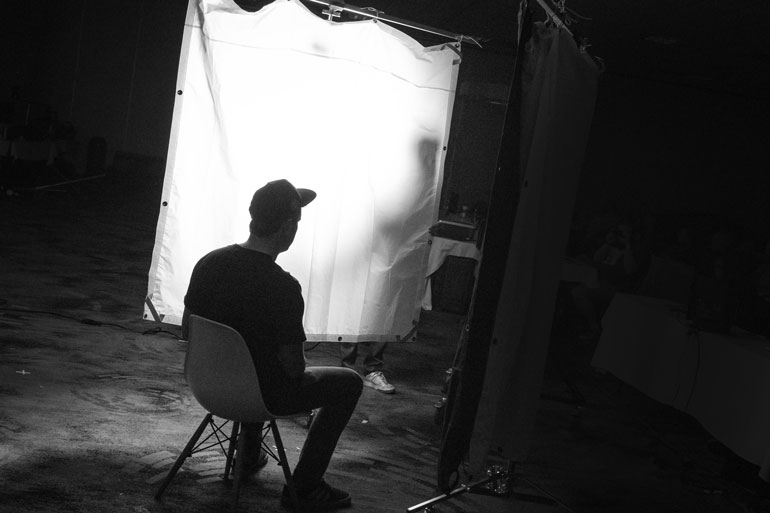 Choosing to interview at the end of a shoot helps you plan your production based on what is achievable with the time and budget you have, which is a very practical approach to video production. But it can also mean you come away missing out on a much more compelling story than you originally envisioned.

Let’s dive into this discussion, so you can weigh the pros and cons and decide for yourself what strategy you prefer for your video projects.

Here’s why you should interview first. Even if you make one or several pre-production calls with your subject, ahead of the shoot, the interview can reveal so much more about your subject. If you’ve ever conducted a documentary interview before, you know how intimate and emotional it can be. 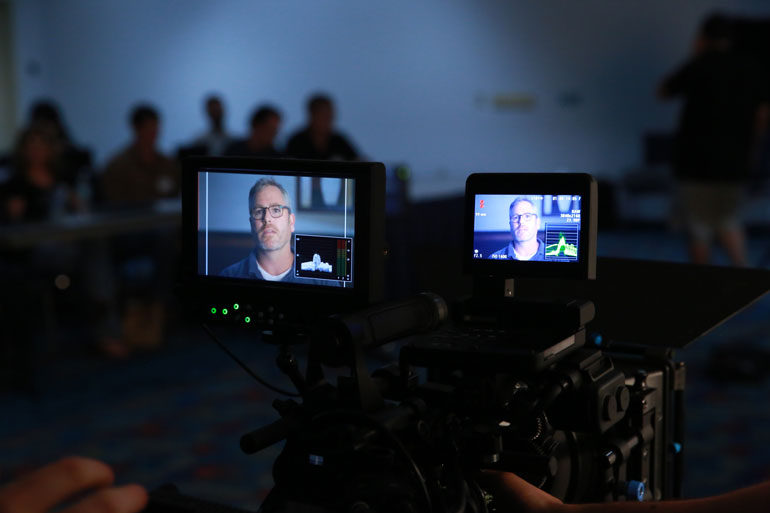 They say documentary filmmakers and doctors get more insight into people than just about anyone else. In a dark room, with a few bright lights shining toward you, you can’t really see the camera or the operator. You hear a question, like “what are your fears?” And suddenly you find yourself thinking out loud, almost like you’re talking to yourself, discussing parts of your life that you maybe weren’t planning to talk about, or were even aware of, but here they are.

A few years ago I shot a short documentary about an animal rescuer living remotely. The half-day shoot went swimmingly, with up-close footage of amazing wild animals, in addition to a scene in a rustic cabin. It was a great video, but it could have been so much more.

During the interview I found out some horrifying details about this subject’s history with animals, and what pushed him to do what he does. It involved an unfortunate animal attack, and death of a loved one. It was a story that hadn’t been told before, and it could have been a tremendous, cathartic opportunity for the subject, in the form of a short film.

But all the shots were completed, and the interview was the last part of the scheduled day, so there absolutely wasn’t any time to explore this topic, nor capture any relevant B-roll. It was a different story altogether, and there was simply no room for it now. 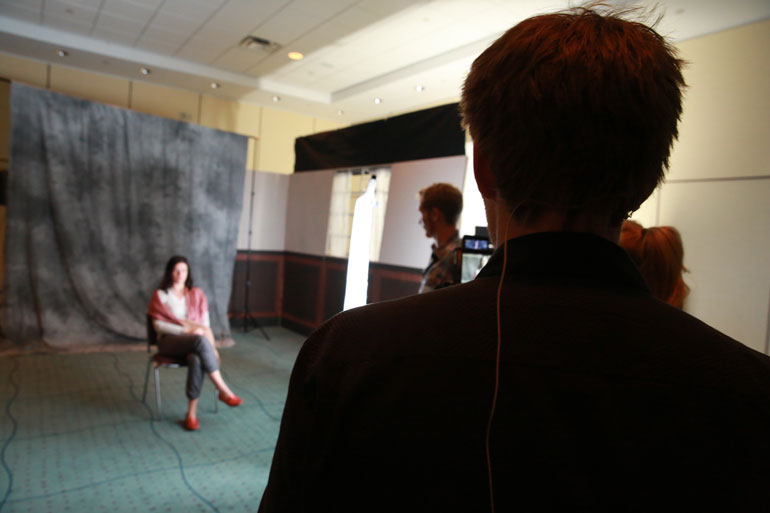 If you explore a subject’s deep reserves first, you open up the story to wherever it goes. You may think the story is about something, but it turns out, you were completely wrong. How can you really know what a story is, even if it’s only a short profile of one person?

Traditionally, a documentary story unravels itself over the course of filming. Whether it’s days, weeks, or months, you follow a subject or several, hope to catch them in states of conflict and resolution, and then put together the best story you can in post-production.

With a short profile of a subject, you might only get a couple days to shoot them, but you still give yourself a lot more space for the story to reveal itself if you interview first. Then you can plan out your B-roll shoot in a way that enhances the story told in the interview. 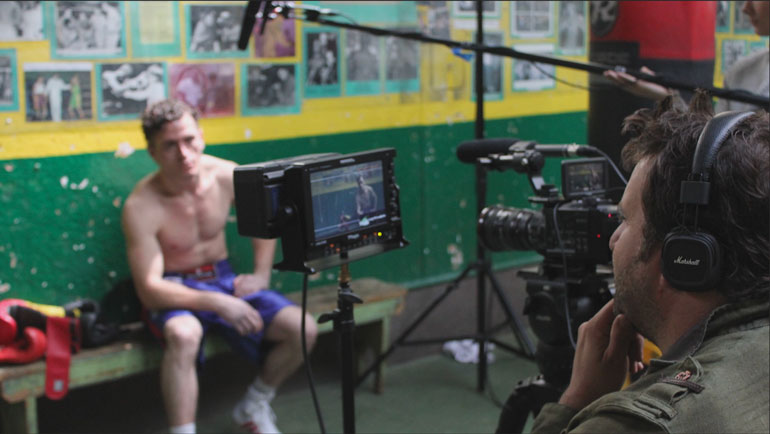 A frame from Philip Bloom's lesson on Interviews in his Cinematic Masterclass.

Now, while the interview-first strategy is certainly an ideal production timeline, it’s not very practical. For most paid gigs, you simply can’t show up to an interview without a clearly defined production schedule. If you don’t know what you’re going to shoot, how long it’ll take, how far you have to travel to capture the shots, and even what the story is about… no client in the world would agree to those terms. 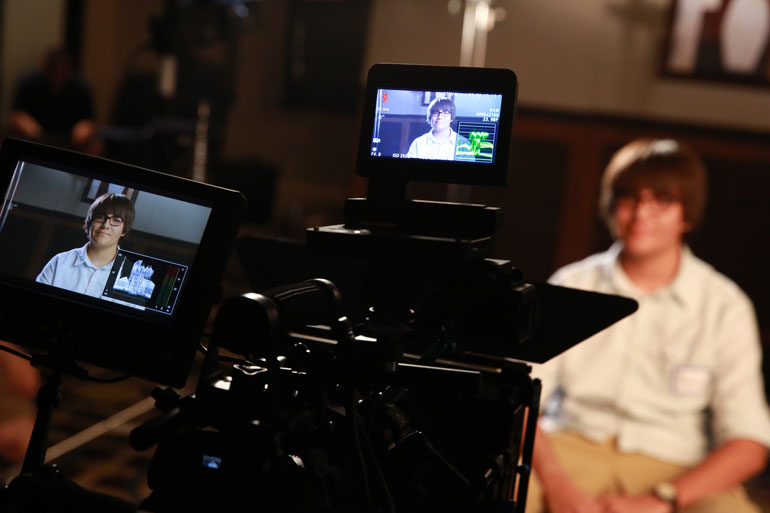 Planning a day of shooting usually means figuring out what you can shoot that’s visually interesting in a short amount of time. Factor in several scenes, along with travel between locations, and limited daylight hours. And often, it’s unlikely you’ll be shooting when there happens to be a very important event or turning point for the subject, so you have to carefully choose scenes that could visually stand in for the scenes you weren’t able to film.

When it comes time for the interview, now you can write questions that are centered around what scenes you have shot, and even other people who appeared in the production. There’s no point in asking about events or people in the interview if you don’t have coverage, and no one wants to sit through a dozen interview jump cuts because you don’t have relevant footage to lay over. 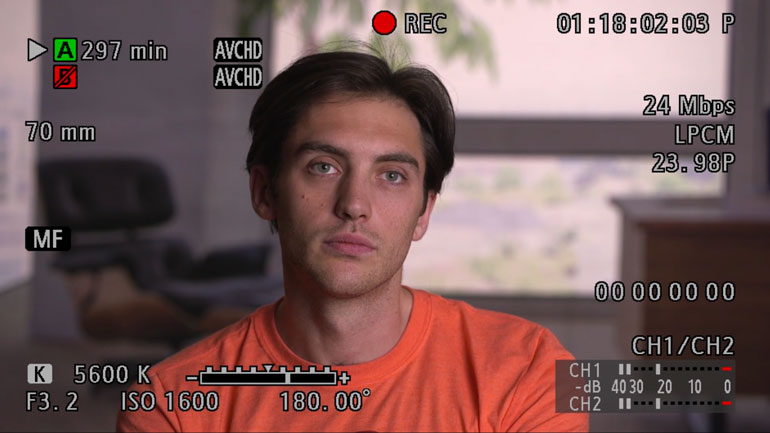 Most importantly with the short production day, with all its limitations, you end up making the best film you can with what you’re given. And that usually means the interview centers around more general “why” questions about achievement, failure, relationships, passions, goals, and so on. Those kinds of questions often lead to better stories than “what” questions that describe in too much detail what the subject is doing rather than why it’s significant. Finally, interviewing at the end of the day is simply a logical bookend to the intense day of shooting. It’s a time when the subject can relax and be fully introspective. And after you’ve spent a whole day with the subject, you’ve built a trusting relationship with them that allows you to ask the hard questions. Sometimes that leads to emotional moments during the interview, and that can be physically draining.

So when the interview is finally over, it’s a natural place to wrap the production, thank your subject, and pack it up for the day. Maybe there’s other scenes you wish you could have secured, or questions you could have asked better, but in this model of shoot first and interview last, you’ve created a good experience for your subject. And leaving everyone feeling good about what they’ve done is just as important to your client, as it is coming away with a good video story.

Do you prefer to shoot the interview first or last? Add your comment below!

The Art of Visual Storytelling